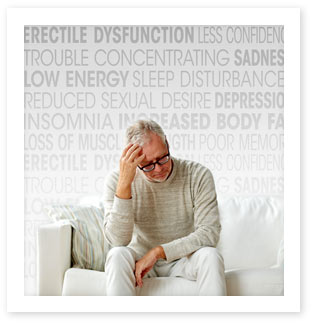 So, you're a guy in your late 50s. You've just awakened and are looking at yourself in the bathroom mirror - as you do every morning. Only today you notice for the first time what must have been there for a while: the love handles, the once bulging pecs that now sort of sag. It gets you thinking. You realize that for some time you haven't had as much energy as you used to, you don't have as much interest in sex, there are times when you feel down and discouraged, and your friends tell you that you're more irritable than you used to be. Is this just aging? Is it simply the inevitable price of your nutritionally rich and exercise-poor lifestyle? Or is it a medical condition--one for which there might be a treatment?

Are you entering "male menopause"? You've heard the phrase, but is there really such a thing?

Like women, men experience a drop in the levels of sex hormones as they age. But in men, the pace of these changes is quite different. In women, levels of the main female sex hormone, estrogen, remain high for most of their adult lives, and then, around the age of 50, plunge over the course of five years. The lower levels of estrogen cause the physical and psychological changes of menopause, including the most obvious one: the cessation of menstrual periods. When a woman has entered menopause, it's not hard for her to tell.

With men, it's much more gradual. Levels of a man's main sex hormone, testosterone, begin to drop as early as the age of 30. Instead of plunging over a few years, the testosterone levels drop very slightly (about 1 percent) each year--for the rest of his life. This change is so gradual that many men may not notice any effects until several decades have gone by. Yet, by 50, 10 percent of all U.S. men have low levels of testosterone. By 70, more than half are testosterone deficient.

Do the progressively lower levels of testosterone cause symptoms in a man, the way lower levels of estrogen do in a woman? There is no doubt that they can, but it can be very hard to tell. Men with certain rare conditions that cause extremely low levels of testosterone develop a loss of muscle mass and bone strength, increased body fat, decreased energy, less interest in sex, erectile dysfunction, irritability and depression. In men with these rare conditions, testosterone-replacement therapy can improve their symptoms.

In the average man, however, linking testosterone levels to symptoms and predicting which men with low levels will benefit from treatment is tricky, for several reasons. First, there are many conditions that can cause the symptoms associated with testosterone deficiency. Alcohol abuse, thyroid and other hormonal disorders, liver and kidney disease, heart failure and chronic lung disease can all cause similar symptoms. Depression can cause many of these symptoms in men with perfectly normal levels of testosterone.

Despite these complexities, symptoms due to testosterone deficiency in men older than 50 definitely occur and can be diagnosed and treated. As many as 10 million U.S. men may be affected. As the baby-boomer generation ages over the next 25 years, this number is expected to rise significantly.

So what should you do if you have symptoms that could reflect a testosterone deficiency? If you are older than 50 and have symptoms, see your doctor. The doctor should first determine whether the symptoms may be caused by other conditions. If not, the doctor should measure blood levels of total testosterone. The tests should be done in the morning, when testosterone levels are the highest, and repeated at least once to ensure accuracy.

If you are older than 50 and have symptoms, see your doctor.

When can you benefit from testosterone therapy? If you have symptoms and extremely low levels of total or active testosterone, you will likely benefit. If you have borderline levels, however, the evidence is less clear: some studies show a benefit, others do not.

Is there a risk to testosterone treatments? In some patients, testosterone-replacement therapy can cause or worsen sleep apnea. High levels of testosterone can raise the number of blood cells, increasing the risk of blood clots, heart attacks and stroke. The most significant concerns regarding TRT are potential effects on the prostate. Prostate growth and cancer are both testosterone-dependent. Increasing testosterone levels could theoretically lead to a greater incidence of enlarged prostates, also known as BPH, and to progression of prostate cancer. Although no short-term studies have shown an increased frequency of prostate cancer in men taking TRT, the long-term effects on the prostate are still unknown.

Many formulations of testosterone supplements are available today. In the United States, the most commonly used preparations are patches, gels and intramuscular injections. Patches and gels are easy to use and provide a constant, steady release of testosterone through the skin and into the blood. However, patches can cause skin irritation, and gels are slow to be absorbed and can leave a musty smell. Intramuscular injections have to be given in a health-care setting every two to four weeks, inconvenient for many men. Additionally, intramuscular preparations produce unnaturally high blood levels right after the injection, which over several weeks fall to unnaturally low levels. Indeed, some men experience a return of their symptoms before the next injection.

Testosterone pills were popular 20 years ago, and prompted the widespread use of testosterone supplements. However, they were found to cause liver damage and liver tumors, and were removed from the market. Since then, newer and safer testosterone pills have been developed and are available in Europe. Once appropriate safety tests have been done, it is likely that they will also become available in the United States. In addition, new hormones called selective androgen receptor modulators (SARMs), which resemble testosterone but do not affect the prostate, are under development. Theoretically, these SARMs could offer the benefits of conventional testosterone therapy and significantly decrease the potential harmful side effects of the therapy.

If your doctor has prescribed testosterone treatment, the dose should be determined by symptom relief. In addition, your doctor should regularly measure your testosterone levels--to ensure that they do not become too high, increasing the risk of dangerous side effects. Finally, you should have regular physical examinations and blood tests to monitor for potential damage to the liver, blood and prostate. Additionally, you and your partner should watch for symptoms of sleep apnea: unusual snoring and daytime sleepiness, and periods of 10 seconds or longer during sleep when you do not take a breath. Sleep apnea is a potentially life-threatening side effect of TRT.

Whether you call it "male menopause" or not, some men do develop serious and bothersome symptoms from testosterone deficiency. Unfortunately, medical science knows much less about male menopause than about female menopause. With the growing interest in this problem, and the likelihood that testosterone pills will re-appear in the United States, that knowledge gap is likely to shrink. Now, if only our prostates would do the same.