A study published in the American Journal of Medicine shows that older adults with greater muscle mass had a lower risk of death during the study period. 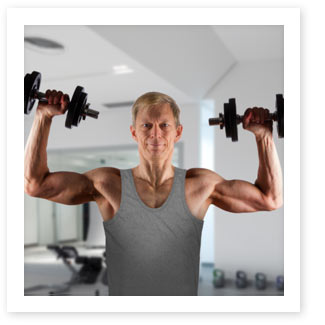 According to Dr. Arun Karlamangla, an associate professor in the geriatrics department at the University of California, Los Angeles School of Medicine, the more muscle that older adults have, the lower their risk of death.

The U.S. National Health and Nutrition Examination Survey was conducted between 1988 and 1994, and included more than 3,600 participants; men 55 and older and women 65 and older. Participants underwent tests to measure their muscle mass; the amount of muscle relative to their height.

Dr. Karlamangla and fellow researchers then used a follow-up survey conducted in 2004 to determine what number of study participants had died of natural causes, and how their muscle mass index was related to their risk of death.

"The greater your muscle mass, the lower your risk of death."

These results add to growing evidence that your body composition is a better indicator of all-cause death risk than your weight or BMI (Body Mass Index), which is an estimate of body fat based on your height and weight. Though the study only shows an association and not a cause-and-effect relationship between your muscle mass index and your risk of death.

Many studies that investigate how obesity affects the risk of death look only at Body Mass Index (BMI), said Dr. Preethi Srikanthan, study leader and assistant professor of endocrinology at the UCLA School of Medicine. "Our study indicates that clinicians need to be focusing on ways to improve body composition, rather than on BMI alone, when counseling older adults on preventative health behaviors."

Study authors concluded that further research should focus on pinpointing the amounts and types of exercise that are the most effective in improving muscle mass in older adults.